There must be shared common ground on what we believe is real, otherwise, there will always be conflict and chaos. The problem is that most people in the cultural West struggle to find such common ground when it comes to truth, because that culture has been spoon-feeding the “live your own truth” mantra to itself for decades. 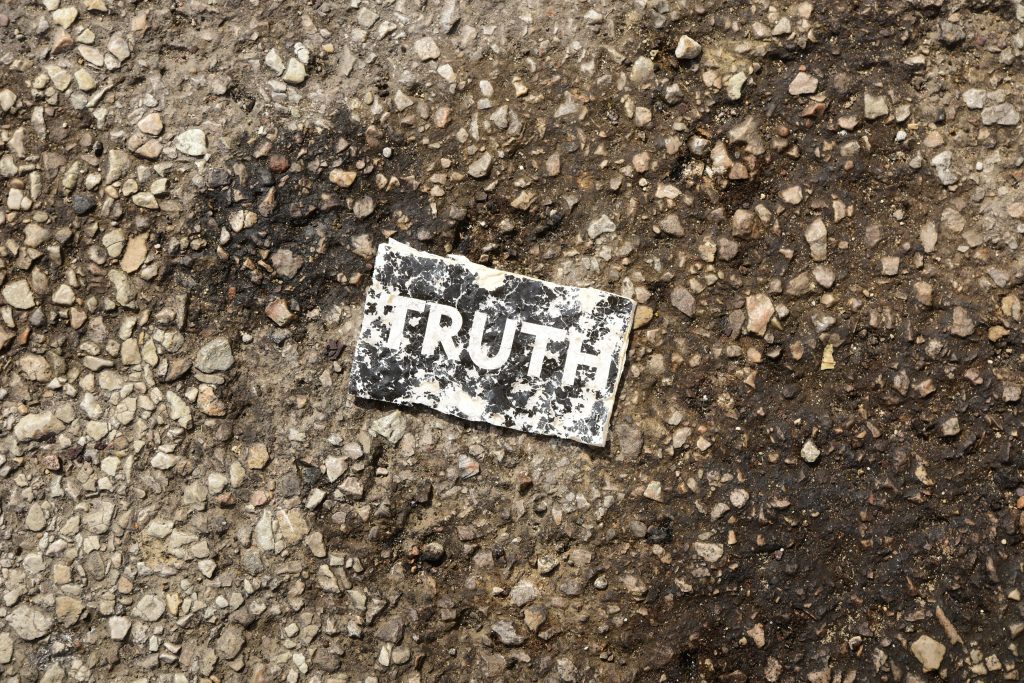 We continue to live in the middle of a cultural civil war where skepticism and cynicism is the name of the game because there can never be unified agreement when everyone is living their own truth. Ironically, the command to live your own truth is a self-negating statement because it’s demanding that all of us submit to the unified truth that we must live a certain way…the statement itself doesn’t make any sense. And we wonder why people can’t seem to agree—“live your own truth” is the kind of thinking that leads to mass confusion about what is factual and what is not.

It’s imperative, therefore, that we move beyond cultural platitudes and build our lives on what is actually real. Our thoughts are shaped by where we gather our information. Those information-formed thoughts will captivate our hearts and minds and eventually reap a destiny. Each of us should desire a destiny that’s built on reality, not falsehood. So, where do you find your facts?

I have a coworker who recently told me that her dad is the subject of an internet conspiracy theory that believes he is, in fact, the completely alive and not-at-all dead king of rock ’n’ roll, Elvis Presley. Tens of thousands of people have claimed online that her father, Pastor Bob, is the jailhouse rocker himself because he sings like Elvis and kind of looks like Elvis if he were still alive today.

Is it true? Is Pastor Bob really Elvis Presley alive and well, preaching to his congregation in Arkansas today? According to my coworker, Pastor Bob’s daughter, the answer is “no.” However, if you dive into the online rabbit hole and look into the arguments for the theory that Bob is actually Elvis, it can be difficult to ascertain the truth because of the volumes of people who believe he really is Elvis Presley.

This is a small and somewhat silly example I’m using to help us understand that we need to be intentional and diligent to seek authenticity when it comes to our information. In the internet-saturated world we live in that tells us certain cell towers give people coronavirus and that there’s a secret city underneath the Denver International Airport, we can’t be quick to believe everything that’s digitally thrown our way.

That might at first seem super obvious, but all of us need to be humble enough to admit we’ve at one time believed certain ridiculous things that we now know aren’t true. Consequently, it’s vital that we’re aware enough to know we can be duped at any moment, and double check the reports and information we rely on to make sure they are actually true.

PUT IN THE WORK

It’s difficult, however, to know what we should trust anymore. Nearly everything out there in the media now feels corrupted by a biased perspective and undermined by foolish commentary and unproven claims. Consequently, looking for truth in a “post-truth” digital age is complicated.

Complicated…but not impossible. If you get all of your “news” from social media, but know in the meantime that a social media algorithm is in charge of your news feed, baiting you to stay online and constantly come back for more in the echo chamber, perhaps you need to raise your standards and seek out the facts elsewhere. Don’t settle; easy and convenient should never be a substitution for truthfulness and integrity.

I’m reminded here of the classic 1998 movie The Truman Show. Jim Carrey plays Truman, a boy adopted at birth by a television studio and placed in a literal bubble of a town with cameras everywhere to record his life, unbeknownst to Truman himself. He is raised with the planet watching his every move, and yet unaware that he’s the star of the world’s most popular television show.

When Christof, the creator of the show played by Ed Harris, is interviewed by a reporter about halfway through the movie, he’s asked, “Christof, let me ask you, why do you think that Truman has never come close to discovering the true nature of his world until now?” Christof then responds with this famous line of dialogue: “We accept the reality of the world with which we’re presented. It’s as simple as that.”

This isn’t a character judgement of Truman, but I think all of us should be willing to put in the work it takes to move past the first digital layer of possibly manipulated information with which we’re presented and find the truth. I’m afraid, however, that the masses are content with simply accepting the “reality” of the world that’s initially presented to them online. Call it ease, comfort, convenience, laziness, or acclimation to expeditiousness, but what is true shouldn’t be sacrificed on the altar of unwillingness to put in the work.

Just because information comes to the palm of your hand quicker than ever before doesn’t mean it’s just as reliable as it is fast. And the weightier the subject, the more important that it’s accurate. For example, if I told you that the carpet in a certain office building was blue when it was actually gray, it’s no big deal. But if I told you that the yogurt you were about to eat was perfectly fine, yet it was actually poisoned, that’s a very big deal. Accuracy is crucial when it comes to consuming poisonous or healthy food, and relatively insignificant when talking about office building carpet color. The greater the meaning, the greater the relevance of truthfulness.

Now factor in God and the spiritual elements of life. Arguably, if God exists and he is knowable by human beings, wouldn’t that be the topic of greatest priority to every person in the world? And if he is knowable, as Christians believe, by the saving work of Jesus Christ through his life, death, and resurrection, the information about this should be sought after with the greatest of precision. Nothing is more important when we’re talking about the eternal, so correctness—not quickness—should be our standard.

And if that is the case, there probably needs to be a significant amount of unlearning we all must do. We can’t settle for “business as usual” when it comes to our methods of research, especially when it concerns the Almighty. We must put in the work it takes to wade through the refuse and find the truth. Nothing could be more important than that. Christians are truth-seekers—men and women who pursue accuracy in life’s small issues, and validity in the grander ones too. May we settle for nothing less than the truth.

And the truth, while somewhat squishy in today’s terminology, is of supreme importance. If we don’t know the truth, it’s impossible to understand reality or even have clarity about the nature of our own selves. Truth reveals falsehood in our lives and purifies us from the filth of falsehoods and lies. In a prayer Jesus once gave for his followers, he said,

God’s Word is truth, and its truthful power sanctifies the believer. If you’ve ever been in any kind of Christian environment, you’ve probably heard the term “sanctification” before. The process of sanctification for a follower of Christ is a gradual movement toward more and more holiness. It’s the inching along each day toward purity.

Now, positionally because of Christ’s atoning work on the cross for the forgiveness of our sins, Christians are pure. I’ve got righteousness in spades because of what Jesus has accomplished on my behalf as a believer (Romans 4:5).

However, sin is still very much a part of my life, and it will be a regular battle that I will fight as a believer until the day I die. The Apostle Paul talks about this in a candid way at the end of Romans 7. He says,

“For I know that nothing good dwells in me, that is, in my flesh. For I have the desire to do what is right, but not the ability to carry it out. For I do not do the good I want, but the evil I do not want is what I keep on doing. Now if I do what I do not want, it is no longer I who do it, but sin that dwells within me. So I find it to be a law that when I want to do right, evil lies close at hand. For I delight in the law of God, in my inner being, but I see in my members another law waging war against the law of my mind and making me captive to the law of sin that dwells in my members. Wretched man that I am! Who will deliver me from this body of death? Thanks be to God through Jesus Christ our Lord! So then, I myself serve the law of God with my mind, but with my flesh I serve the law of sin.” (Romans 7:18–25)

This famous passage puts legs on the somewhat misunderstood battle for sanctification in the life of a believer. We delight in the Word of God as Christians, but the sinful nature is pushing back and continually waging war against the sanctification process. Positionally, we are pure (again, because of Christ), but progressively in life, the Spirit of God is continually refining us to make us more and more like Christ. We are simultaneously completely sanctified and becoming more sanctified.

The truth (God’s Word) does that for us. It makes us progressively more holy as we yield to its commands and continually more righteous as we submit to its authority. This is enormously important as we live in a society that constantly questions where the truth comes from. We don’t define the truth ourselves, but rather, the truth defines us. And in the process of defining who we are as children of God, we are shaped more and more into the image of Christ, the Ultimate Truth.

Finding real truth in a society that seems to regularly try to redefine it can be difficult for a follower of Christ, but resting in the trustworthiness of the Bible will always point us in the direction of Jesus himself, who sanctifies our filthy souls.